Since Erikousa is the first port of call for ships from Corfu to the Diapontia Islands,it is slowly pulling ahead in the number of visitors.Yet it is far from becoming crowded. It is an island where you will enjoy wonderful walks through verdant nature to splendind old villages.

Eríkousa island is the middle in size among the three Diapóndia islands. Its roundish shape measures 2.5 km (1.6 mi) by 1.5 km (0.9 mi). The island lies just a few nautical miles off the northwest coast of Corfu.

Since the beginning of the second millennium AD, Eríkousa was conquered suc-
cessively by the Francs in the 11th century and the Venetians in the 12th. In 1537,
however, the ferocious Turkish pirate, Barbarossa, invaded the island and mas-
sacred the whole population.
When the Greeks pulverized the Turks in the Battle of Nafpaktos, in 1571,
people felt safe to re-inhabit the island. When the British occupied Corfu in 1814,
Eríkousa came under their jurisdiction as well.
Finally, with a treaty signed by England, France and Russia on the 5th of Oc-
tober 1864, all of the lonian islands were ceded to Greece, including Eríkousa.

The island is mostly flat, with the steepest areas being along the coast in the north. The landscape is a boundless carpet of greenery ranging from jungle-thick bushes, to enormous ol- ive trees (over 10.000) interrupted only by the spikes of cypress trees that rise above them. Whatever soil is not cov- ered by trees, is embel- lished by wildflowers that survive throughout the year. In spite of the island's natural beauty, most vis- itors come for its equally attractive beaches and its sparkling clear waters.

WHAT TO SEE AND DO

With no major sights, monuments or museums, the principle attraction is the island's unspoilt nature, its inland villages with Italian-influenced architecture and its wonderful beaches. The lush greenery is in absolute contrast to the arid landscape of the Cyclades islands. 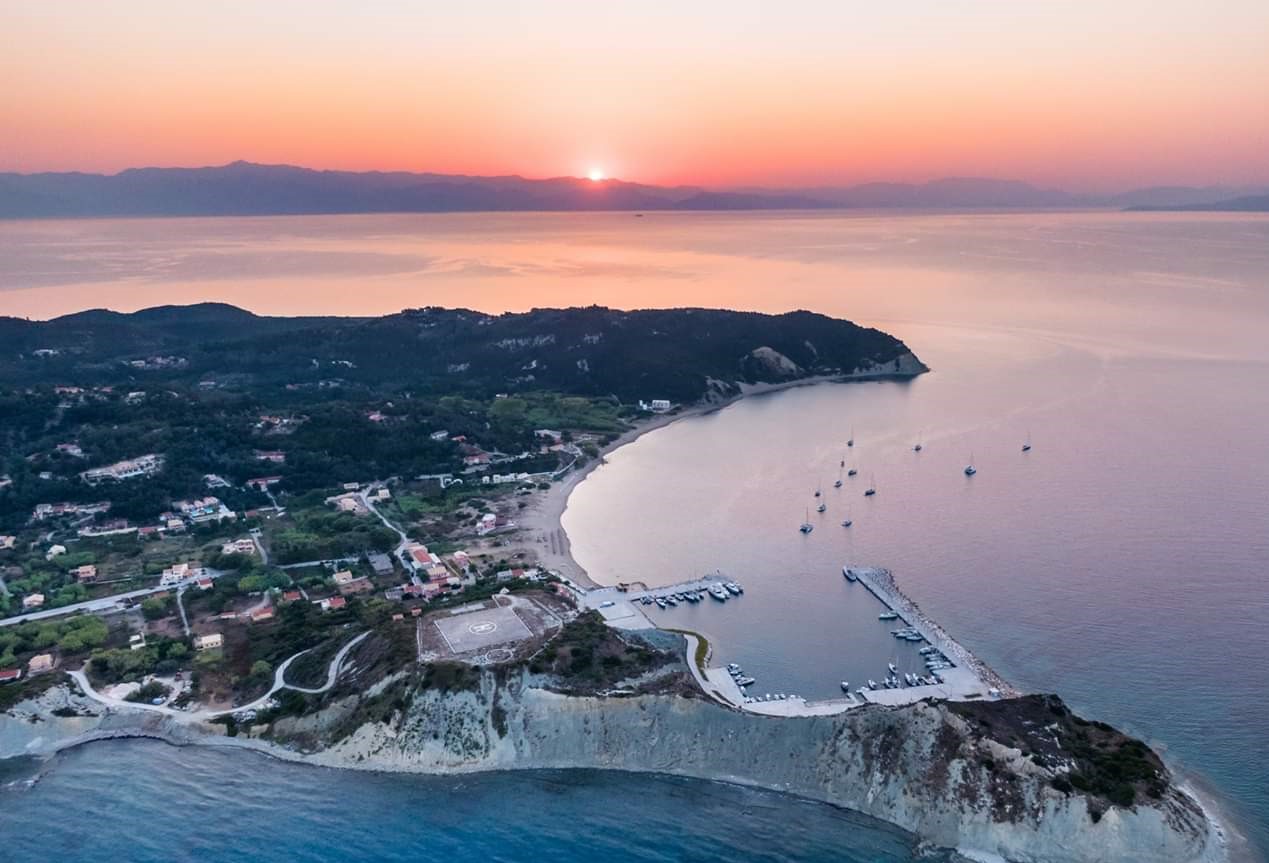 The principle settlement on the island, charming Pórto still retains its tranquil posture, in spite of being the center of activity. The little port, the well-main- tained houses, the cafés, the restaurants, the litter-free slate streets and the excellent beach add to its attraction. 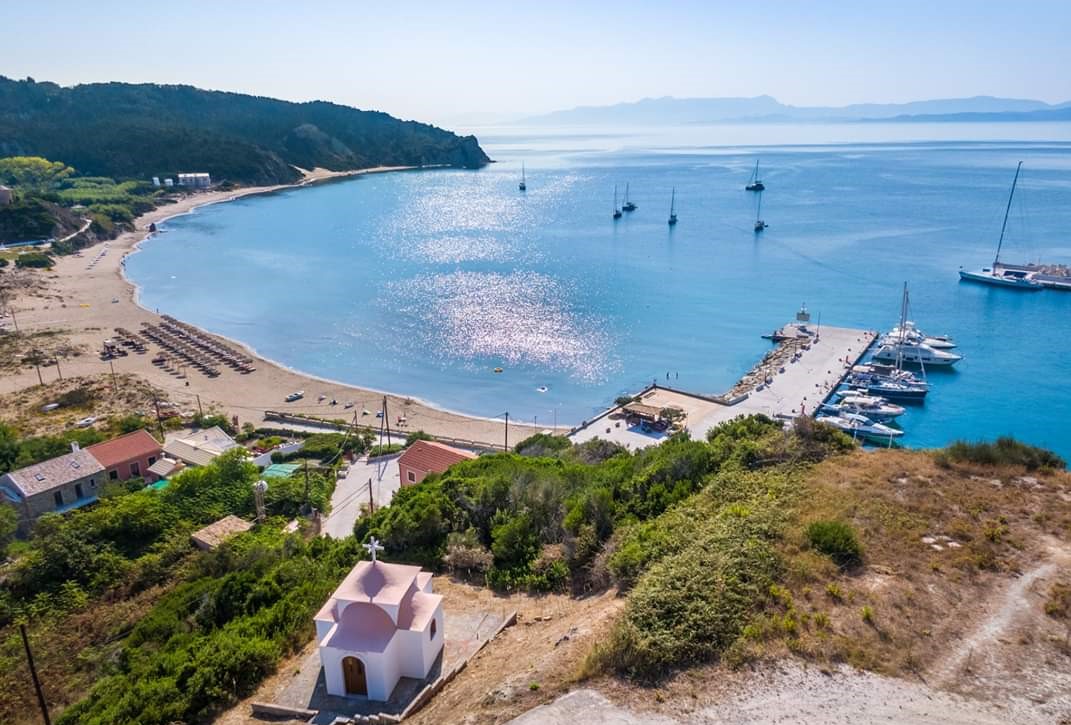 Behind the hill with the old windmill at the end of Porto beach, you will find the church of Agía Triáda, smoth- ered in thick greenery. Its beautifully sculpted stone belltower dates back to 1584. 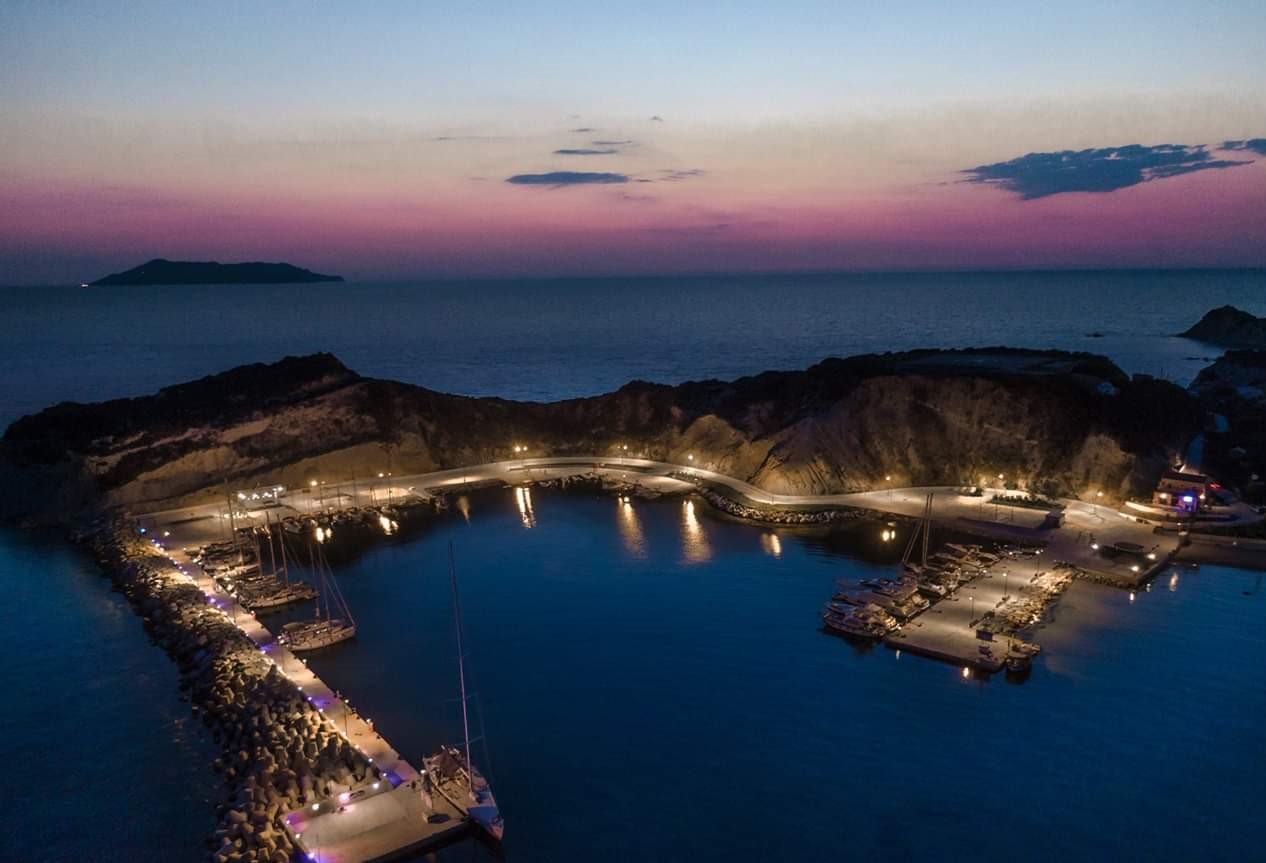 The center of the island is dotted with the lovely spread out old villages of Nikolátika, Paliokalýva, Déndra, Gritziátika, Fýki and Touri, all hidden among the olive trees. Notice their well maintained flowered gardens. 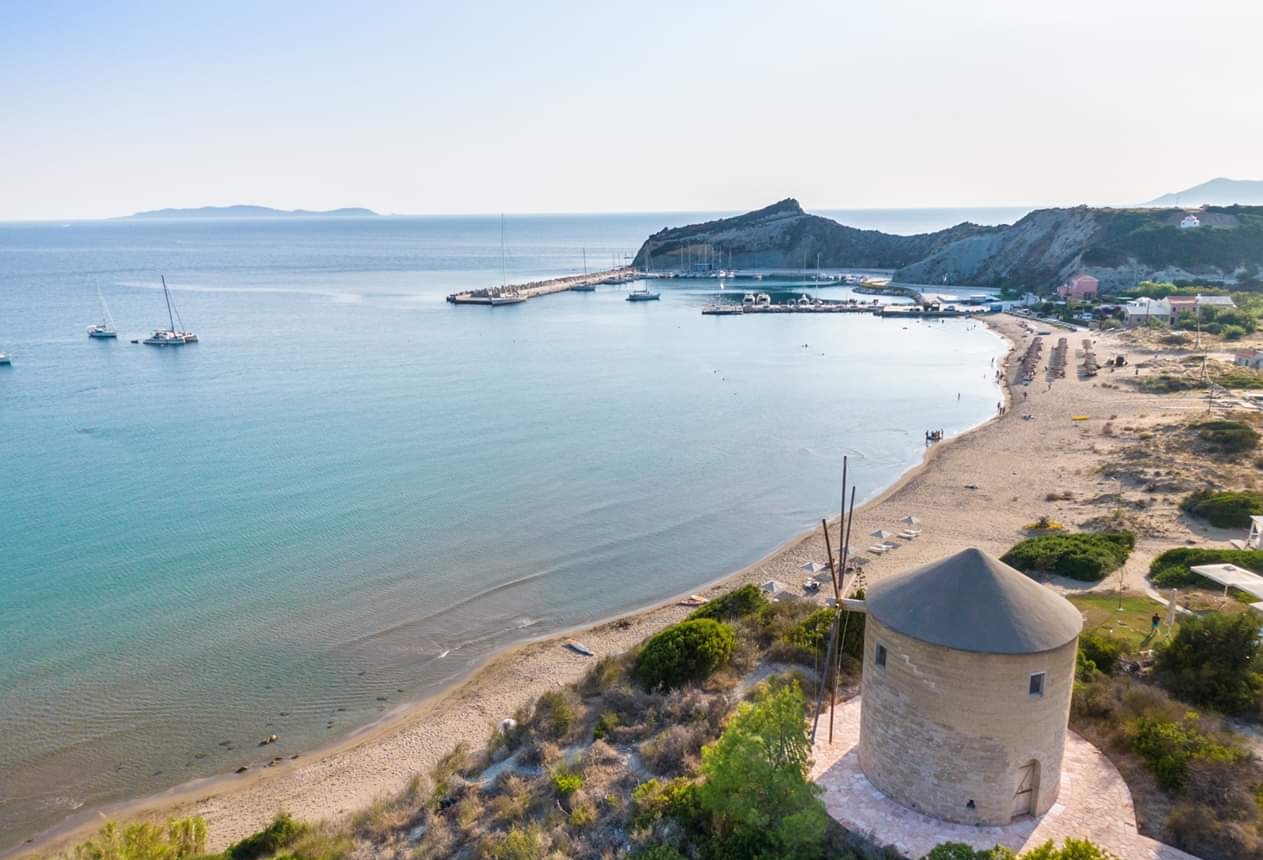 The long, beautiful, sandy beach lining
the harbour of the main settlement of
the island is the most convenient and
the most popular. It is partially organ-
ized with umbrellas and sunbeds and
it even has showers! If you want more
privacy, all you have to do is to walk to
the left end. The shallow, clear waters
with their sandy sea-bed are ideal for
children.

This peaceful, unspoilt beach, surround-
ed by a forest, with lilies in the fore-
ground and Albania in the background,
offers even more seclusion. You will
reach it on foot from a path or by a nar-
row, paved road. 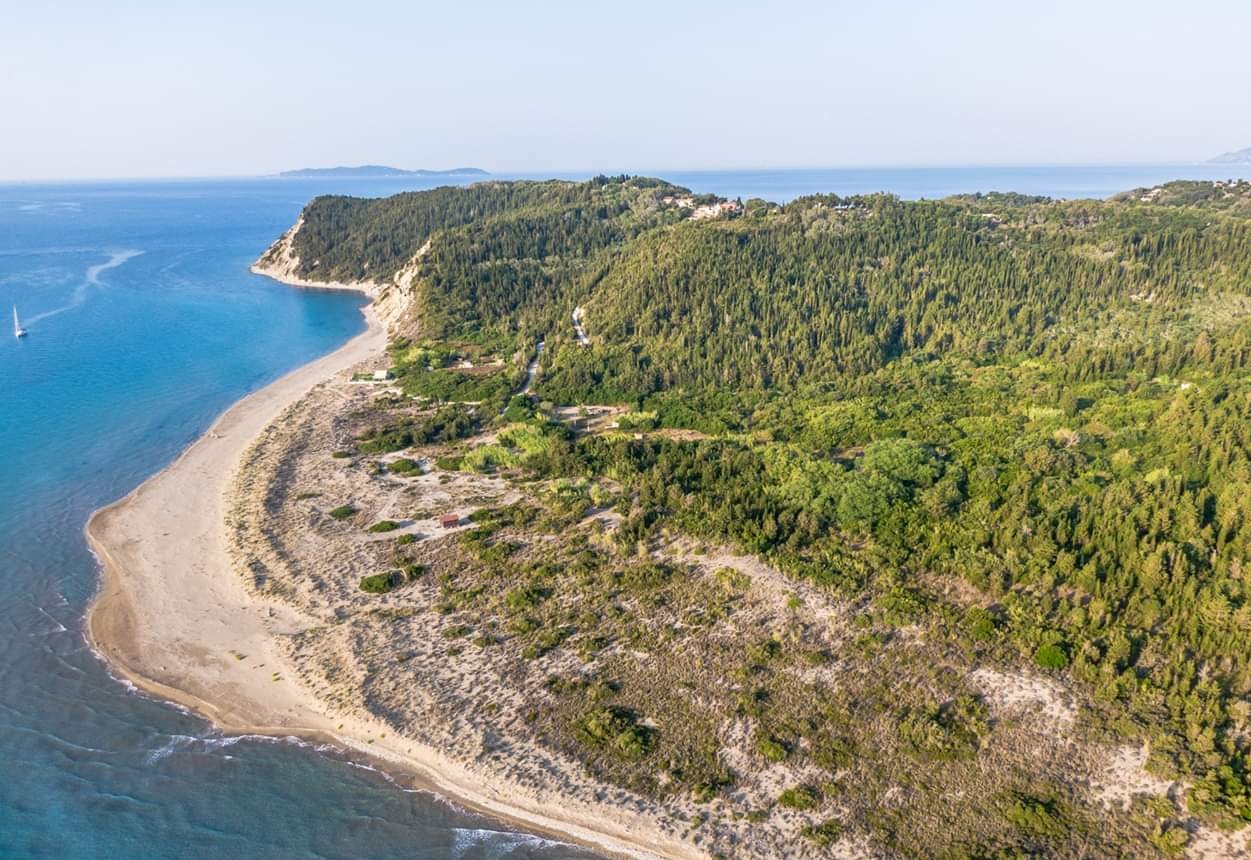 Other things to do

You can spend many hours walking along the gorgeous paths, marked with artful
wooden signs, through olive groves, half-abandoned villages and unspoilt nature,
The further you venture, the more you will appreciate the calm and beauty of the
island as well as the unhurried lifestyle of the people who seem to belong to some
previous generation.
Once you have visited the central villages, you might also want to climb
Katergo, the hill to the west of the port, from where you can admire the view
of the attractive port and Pórto Beach. From there, continue to the old quarry of
Péra Kátergo where the view is wilder, with cliffs down to the sea. Notice the
stone cross in memory of a shipwreck 100 years ago.
Another wonderful walk starts from Porto, passes by Agia Triada, continues
through Paliokalýva and ends at Braggini Beach.

Snorkelling
The clear waters and the interesting seabed make snorkelling, spear fishing and
diving an intriguing pastime.
Panigýria
Lively festivities, called Panigýria, follow evening liturgies. The most renowned
one on the island is held on August 14 and 15 at the church of Agia Triáda

Enjoy the best possible vacation for your family